paired with its matching wine glass makes a unique gift

that features a special time in Shelter Island’s history. 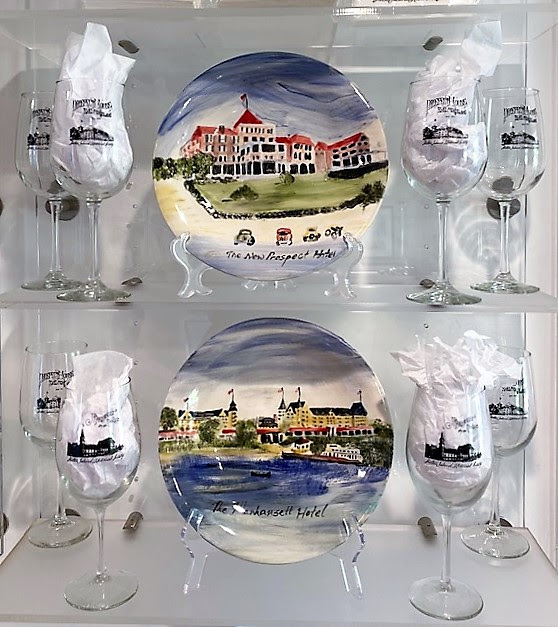 There were two iterations of the Prospect House. The Old Prospect House, pictured on these wine glasses, burned down in 1924.  It was rebuilt and expanded into the New Prospect House, which ended up burning down in 1942. The Old Prospect had space for 300 guests, Edison electricity as early as the 1890’s, dining rooms, parlors, en suite bathrooms, gorgeous views of the bay, and even its very own sewer system. The pavilion near the ferry landing housed a bowling alley, billiard room, and dance hall. Tennis, archery, horseback riding, sailing, and beach swimming were all provided for the Prospect House’s esteemed guests. The Hotel had been noted as one of the best-known summer hostelries in Eastern Long Island.

The Manhanset House Hotel was originally built in 1873. The property included about 200 acres of what is now Dering Harbor Village. The luxury hotel offered hotel rooms or cottages for the summer. It provided electric and gas lighting, expansive stables, a bathing beach, dance hall, golf course, a ferry slip, and a wharf for the steamboats that carried hotel guests. A fire destroyed part of the building in 1896 but repairs and expansion were completed the following year. It was struck by lightning in 1910 and burned entirely to the ground and was not rebuilt.

Carol Wilson are available at the Havens Farmers’ Market on Saturday mornings. 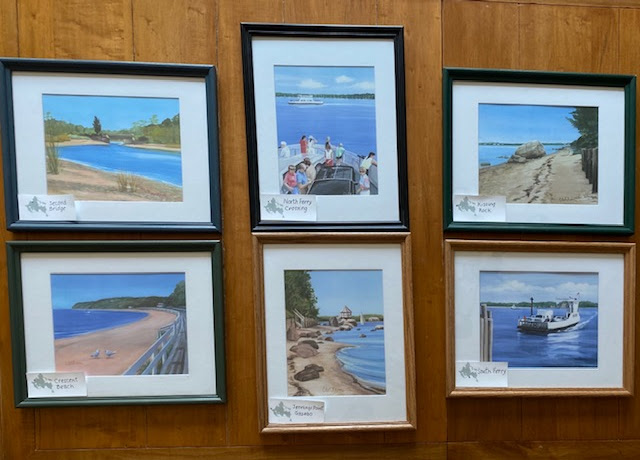 Carol moved to Shelter Island in 1967 and was instantly and permanently inspired by its beauty and endless variety, finding it a perfect place for a painter! From 1968 to 2003 she owned and operated the Island Gallery on Bridge Street producing portraits and other commissioned works as well as countless Shelter Island views. Ms. Wilson also headed the art department at the Shelter Island School from 1972 to 1991 where she taught visual arts to the students in grades kindergarten through 12. She currently specializes in commissioned portraits of children, houses, pets, horses, beachscapes, and more.