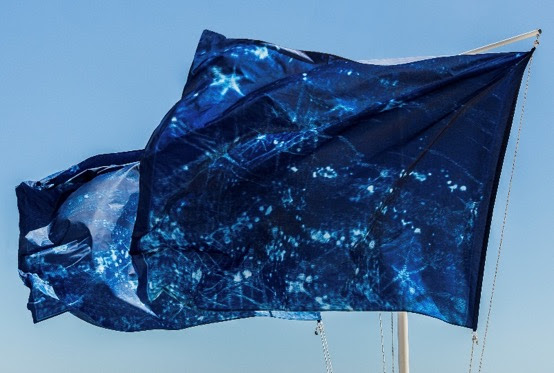 Kiki Smith, Flags. Courtesy DESTE Foundation for Contemporary Art.
Photo: Eftychia Vlachou
——————
Storm King is delighted to present Kiki Smith: Water, a solo exhibition of indoor and outdoor works that marks the artist’s first presentation of flags—a new element within her expansive production—in the United States. For the exhibition, on view from May 9 to November 9, 2020, Kiki Smith (b. 1954, United States) will create a new collection of flags whose unpredictable, ever-changing movement will mimic the ebb and flow of water in a river. Installed alongside four outdoor sculptures on Storm King’s Museum Hill with long views of the surrounding mountains, the flags will present an ephemeral installation that is activated by the natural world around it.

A carefully selected group of works from Smith’s career will also be on view in Storm King’s Museum Building, which will pay homage to the threatened yet brilliant natural environment of the Hudson Valley—with a particular concentration on water. Smith considers the natural world through various media including printmaking, multimedia sculpture, photography, and textiles. Kiki Smith: Water will be a materially rich exhibition referencing Storm King’s proximity to the Hudson River, the artist’s intimate consideration of space and context, and highlighting the Art Center’s distinctive indoor and outdoor features.

Kiki Smith: Water is organized by Storm King’s Senior Curator Nora Lawrence.
Outlooks: Martha Tuttle
May 9 – November 9, 2020
——————
For the eighth year of its Outlooks program, in which the Art Center invites an emerging to mid-career artist to present a large-scale, temporary outdoor project in the landscape, Storm King is working with New York-based artist Martha Tuttle (b. 1989, United States). This work, entitled A stone that thinks of Enceladus, will mark Tuttle’s first major outdoor work, and her first solo museum presentation. Tuttle’s project will unfold across a large, rolling field at the southern end of Storm King’s property.

Addressing mapping and a search for meaning within a landscape from a subjective and embodied perspective, Tuttle will construct a series of placed stones and cairns, created from stones gathered at Storm King, carved marble, and cast glass. The human-made stone stacks will be installed among boulders from the Storm King site. The artist asks the viewer to respond to these cairns as an experience of bodily location, inviting them to recognize their own physicality on and within land, both at Storm King and in the Hudson Valley. The artwork explores a point of contact between human and non-human experience and asks, “How can we who have bodies develop a sense of intimacy with the vastness of land and its geologic time?”

Rashid Johnson, The Crisis and The Hikers
May 9 – November 9, 2020
——————
Storm King is pleased to present two works by artist Rashid Johnson (b. 1977, Chicago), whose deeply personal artistic language draws on richly symbolic materials in order to explore themes of individual and shared cultural identities, personal narratives, history, and materiality. Never before presented in the United States, The Crisis (2019), a gridded, sixteen-foot tall yellow pyramidal steel sculpture, will be set within one of Storm King’s native grass fields. On occasion through Storm King’s season, the work will be enlivened by a trumpet player performing from its second story. The work is titled after Harold Cruse’s 1967 study, The Crisis of the Negro Intellectual, an influential volume from the Civil Rights movement, but also references current events. Johnson has said the title “talks about the time we’re living in. When I was making this work, there was so much talk about a ‘crisis at the border’—there’s something so critical and odd about employing that language. We are in a moment of peril and fear.”

The sculptural presentation will be activated and accompanied on two occasions across Storm King’s season by performances of Johnson’s 2019 ballet, The Hikers, which he conceived with choreographer Claudia Schreier in Aspen, Colorado. Johnson and Schreier will adapt The Hikers specifically for Storm King’s vast landscape. The Hikers follows the path of two solo hikers, both African American: first alone, and then upon seeing the other—an encounter that brings tension, but also relief and wonder. As Johnson has said, “The body is filled with adrenaline. How does the black body function in space when it’s being witnessed, versus when it’s not? It’s about how the body becomes accustomed to the conditions of stress and anxiety.”

The Crisis (2019) will be on loan to Storm King for the 2020 season from the artist and Hauser and Wirth.

Ugo Rondinone, the sun
May 9 – November 9, 2020
——————
Storm King will exhibit the sun, by Ugo Rondinone (b. 1964, Switzerland), a large-scale sculpture that will remain on view through the duration of the Art Center’s 2020 season. Rondinone has a longstanding interest in the link between the natural world and the human condition, and his ‘sun’ series, first realized in 2016, tackles notions of temporality and the distinction between the natural and the artificial. The work is a 16-foot-diameter ring of gilded bronze, cast from a circle of intertwined tree branches, and will be sited on a hill in Storm King’s rolling South Fields. The presentation will resonate deeply with the specific context of Storm King’s site, opening up further dialogue around monumentality and nature.

the sun (2018) will be on loan to Storm King for the 2020 season from the artist; Gladstone Gallery, New York and Brussels; and Galerie Eva Presenhuber, Zurich and New York. 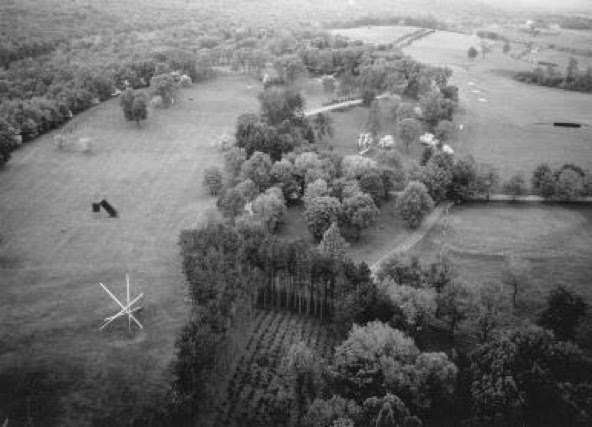 Storm King will celebrate its 60th Anniversary with a special feature on its website, which will present historical content and insights into the Art Center and its achievements since opening in 1960. The dynamic online exhibition will survey Storm King’s role as a leading contemporary outdoor sculpture museum and landmark cultural destination, as well as its longstanding creation of the landscape and preservation of the environment. The exhibition’s narrative will center around pertinent and interesting documents and photographs from the Storm King archive, enlivening the story of Storm King’s development over six remarkable decades.